The Effect of Stress on Global Cerebral Ischemia 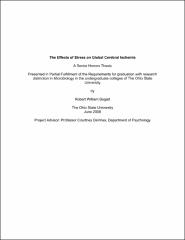 Cardiovascular disease is the leading cause of death and disability in the United States. There is the potential for permanent damage to the brain even among those individuals who are successfully resuscitated. This damage can be exacerbated with the addition of stress. The purpose of this project was to determine the effects that chronic stress have on mice following cardiac arrest with cardiopulmonary resuscitation (CA/CPR). It was hypothesized that mice exposed to chronic stressors would have sufficient levels of glucocorticoids to exacerbate post-CA/CPR behavioral alterations, neuronal death, neuronal morphology, and microglia activation. The mice in the stress groups were subjected to randomly timed (between 00:00 and 14:00 hr) restraint for two weeks, 2 h/d prior to CA/CPR. Forty-eight hours following the last exposure to the experimental stressor, the mice were exposed to global cerebral ischemia followed by reestablishment of blood flow 8 minutes later. Experimental global cerebral ischemia was induced by injecting potassium chloride via a catheter attached to the right jugular vein. After 8 minutes, resuscitation was initiated by injection of epinephrine in conjunction with chest compressions. The core body temperature was manipulated to limit cell damage strictly to the brain by lowering the core to 27°C and maintaining the head at 37°C. Behavioral responses to CA/CPR were assessed using the elevated plus maze test and the open field test. These tests were used as indices of anxiety-like behavior following CA/CPR. Hippocampal tissue was collected 24 hours after resuscitation to assess cytokine production. The CA/CPR groups produced significant increases in gene expression of Interleukin-1β (IL-1) and tumor necrosis factor-α (TNF-α) when compared to the sham-operated (SHAM) counterparts. However, the stress+CA/CPR group means were not significantly different from the CA/CPR groups. In a separate cohort of mice, behavioral analyses were conducted and tissue was collected 5 days post-CA/CPR surgeries. Hematoxylin and eosin stain (H&E) revealed significant increases in neuronal cell death following CA/CPR relative to SHAM, and was further exacerbated by the addition of chronic stress. The microglia activation marker (Mac-1) stain in the CA/CPR group revealed significant increases in activation of microglia when compared to SHAM, but there was no effect of stress on these measures. The Golgi stain with Scholl analyses displayed apical dendritic retraction in the hippocampus relative to the SHAM following CA/CPR. This was exacerbated in the mice that were exposed to chronic stress prior to CA/CPR. This same pattern was observed in reduction of dendritic spine density. Overall, these data suggest that glucocorticoids are a key player in neuroinflammation and immune dysfunction following CA/CPR. Advisor: Dr. A. Courtney DeVries