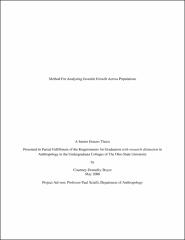 Comparing growth data across populations is one way to assess health differences among people. However, judging these populations based on raw data does not accurately reflect differences until data is standardized. A detailed analysis using population-independent methods that discard source sample problems and normalize the results is the best method for comparing growth data. Here, I present a demonstration of this method using data collected from four prehistoric Ohio Valley sites: SunWatch, Danbury, Buffalo, and Pearson Village. This paper presents a compilation of adult and juvenile skeletal characteristics of an internally-consistent analysis that produced a set of statistical data illustrating continuity between the growth of prehistoric Native American juveniles and modern white juveniles of European descent.