Corruption, Pedophilia and Accountability in Mexico: The Case of Lydia Cacho Ribeiro 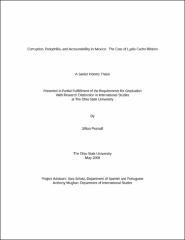 It is widely acknowledged in the literature on ‘illiberal’ democracies that there are deficits in institutional guarantees of accountability in many new Latin American democracies. Guillermo O’Donnell defines two dimensions traditionally used to measure the quality of democracy: vertical electoral and horizontal accountability. Vertical accountability focuses on elections as a form of control that citizens have over their government. Horizontal accountability concerns the effective operation of the system of checks and balances and due process in governmental decision making (O’Donnell: 1995). Catalina Smulovitz and Enrique Peruzzotti claim that the concept of vertical accountability must not be limited only to elections. They claim “by focusing on traditional mechanisms of accountability- elections, the separation of powers, and the existence of a system of checks and balances among the various branches of government- [one] ignores the growth of alternative forms of political control that rely on citizen action and civil-society organizations.” There is a very important social dimension to accountability that can be especially valuable in Latin American democracies (Smulovitz and Peruzzotti: 2000). In this research I refine the understanding of the concept of accountability through an empirical case study of Lydia Cacho Ribeiro, a Mexican human rights/women’s rights defender who exposed a child prostitution ring in Cancun, Mexico. Cacho’s case is important for one’s understanding of the obstacles and successes in Mexico’s current democracy. From this case I draw conclusions on how social accountability can be used to strengthen Latin American democracies. In this research I explore models of organized crime and corruption in Mexico, the roles of international and domestic human rights organizations in exposing the Cacho’s case, the resistance of some government officials to social accountability, and the impact this case had on initiating horizontal mechanisms of control. I conclude that social accountability is important in Mexico because civil society has to play a strong role as a social watchdog and investigator because the Congress is still weak and old authoritarian centers of power still maintain a firm hold over state-level judiciaries. Also, international and domestic human rights organizations must play a central role in setting and pushing agendas. Nevertheless, social accountability mechanisms in Mexico are becoming more focused and effective at producing a clearer response in terms of actual congressional legislation and Supreme Court action. Mexico’s case exemplifies the much stronger role civil society must play in new democracies. However, highlighting social accountability is not meant to deemphasize the importance of horizontal/vertical accountability but rather stress how social accountability can promote and strengthen horizontal accountability.