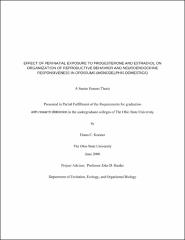 The gray short-tailed opossum (Monodelphis domestica) is a small (60-150g), pouchless, nocturnal marsupial native to Brazil. Previous studies have shown that when males of this species are castrated as adults and later treated with female hormones (estradiol and progesterone), they will exhibit female receptive behavior and even allow penile intromission. In some eutherian species, such as the laboratory rat, these feminine receptive behavior patterns cannot be activated in castrated adult males because of the defeminizing effects of testosterone, secreted by the male fetus, and the maternal hormone, progesterone, secreted during gestation. The difference between opossums and rats in expression of female receptive behavior might be related to differences in their exposure to progesterone during development. Opossums have a short, 15-day gestation and the critical period for differentiation of sexually dimorphic behavior is 8 days after birth when maternal progesterone is low. By contrast, the critical period for differentiation of sexual behavior in rats is late in the 22-day gestation when progesterone levels are high. The hypothesis tested in this study was that increased exposure to progesterone during the critical postnatal period would defeminize receptive behavior in male short-tailed opossums as well as reduce their ability to exhibit an LH rise. Male and female opossums received on postnatal day 8, either: 1) corn oil alone (i.e., control n=26), or corn oil with: 2) progesterone (n=29); 3) both estradiol and progesterone (E+P, n=29); or 4) a progesterone receptor antagonist, (mifepristone, n=37). All were gonadectomized (GDX) before the age of puberty (11 weeks of age), and after receiving female hormone replacement therapy as adults (27 weeks of age), they were tested for female sexual behavior by pairing them with stimulus males over a 25-hr period. Blood samples were collected every 3 hours for 16 hours beginning 1 hour before pairing, and the concentrations of estradiol and LH in plasma samples were measured by radioimmunoassay and a Leydig cell bioassay, respectively. Both males and females were sexually receptive to stimulus males, and the hypothesis regarding the defeminizing effect of progesterone on receptive behavior was rejected. Males treated neonatally with both estradiol and progesterone were more likely to copulate than other treatment groups, including control females (p < 0.015). This surprising result indicates that estradiol, in combination with progesterone, feminizes sexual behavior in males of this species. Progesterone-treated animals showed more and mifepristone animals showed less fighting (p < 0.02) than controls. Mifepristone animals also elicited more scent marking from stimulus males (p < 0.04) than animals in other neonatal treatment groups. These results indicate that progesterone has a role in masculinizing fighting behavior in opossums. By increasing progesterone exposure during the critical period of sexual differentiation, aggressive behavior is increased in the adult opossum. The proportion of males and females neonatally treated with estradiol and progesterone that exhibited an LH rise was lower than in control animals. The high level of copulation in E&P-treated males and low incidence of an LH rise in this group suggests differential organization of the GnRH surge mechanism and receptive behavior. Estradiol concentrations revealed that estrous levels of estradiol were necessary for an LH rise, but not copulation. The percentage of control males and females exhibiting LH rises was similar, indicating that a LH rise might be a normal, hormonal response to pairing in male and female opossums. Advisor: Dr. John Harder