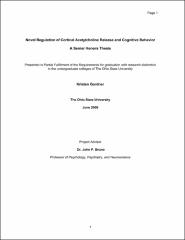 ABSTRACT There is an evolving literature demonstrating the ability of non-neuronal cells to regulate the release of traditional neurotransmitters within various brain regions. Specifically, astrocytes may play a more substantial role in regulating chemotransmission than previously thought. Anatomically, astrocytes lie in close apposition to neurons and can functionally impact neuronal signaling through generation of neuroactive compounds like kynurenic acid (KYNA), a byproduct of the kynurenine pathway (KP) of the metabolism of tryptophan. Endogenous levels of KYNA antagonize α7 nicotinic ACh receptors (nAChR). As such, KYNA can regulate the release of traditional neurotransmitters like glutamate and dopamine which have the ability to positively modulate acetylcholine (ACh) levels in the medial prefrontal cortex (mPFC). Given the essential activity of nAChR in cognitive behaviors such as attentional processing, dysregulations in the KP may be functionally significant as elevated levels of cortical KYNA have been associated with schizophrenia. Furthermore, schizophrenic patients also display severe cognitive deficits in executive functioning characterized by impaired cognitive flexibility. Performance in tasks that measure cognitive flexibility, such as perceptual set shifting, is dependent upon the integrity of prefrontal activity. As such, this project has two specific aims. The first determines the ability of local KYNA to modulate basal cortical ACh release in the mPFC. Male Wistar rats were implanted with microdialysis guide cannulae into the mPFC, and the rats were perfused, in randomized order, with the following drug treatments; artificial cerebral spinal fluid (aCSF) as a vehicle control, KYNA (100 nM), a kynurenine aminotransferase II (KAT II) inhibitor, UPF-874 (5 mM), and KYNA (100 nM) + UPF-874 (5 mM). We discovered that KYNA bi-directionally modulates basal ACh release in the mPFC as KYNA attenuated ACh release and inhibition of its synthesis by UPF-874 potentiated ACh release locally within the mPFC. The second aim determined whether varying KYNA levels was associated with a type of cognitive deficit observed in schizophrenia. Male Wistar rats were tested in a prefrontally-mediated set-shifting task which required two session of testing on consecutive days. On day 1 (Set 1), animals are trained to discriminate between brightness (black versus white) or texture (smooth versus rough) dimensions, until reaching a criterion performance level (8 consecutive correct trials). On day 2 (Set 2), animals are trained on the alternative (extra-dimensional) discrimination strategy for 80 trials, regardless of performance. Animals received either a systemic injection of saline or kynurenine (50 mg/kg) prior to testing on Set 1 or Set 2. We discovered that elevated KYNA levels specifically impaired the ability of animals to perform an EDS that was not due to a general cognitive impairment as increasing levels of this metabolite did not impair rule acquisition. Collectively, these studies indicate a role for KYNA dysfunction in schizophrenia. Therefore, drugs which inhibit or decrease the production of KYNA (ie. KAT II inhibitors) may be effective pharmacotherapies for the treatment of cognitive deficits observed in schizophrenia.