The Roles of Smad2 and Smad3 in Mouse Skin Development 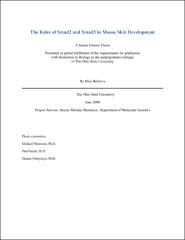 The TGF-β cell signaling pathway functions in organism development, wound healing, skin function, hair growth, and tumorigenesis. Smad2 and Smad3 are proteins that specifically mediate TGF-β signaling. Previously in Dr. Weinstein’s lab, a graduate student Mark Hester deleted Smad4, a mediator of TGF-β signaling downstream of Smad2 and Smad3, in skin fibroblasts. He observed defects in skin development and suggested that TGF-β signaling in fibroblasts was critical for skin development. Since Smad4 mediates BMP signaling as well as TGF-β, this project intended to determine the roles of Smad2 and Smad3 in skin development and tumorigenesis. To demonstrate that defects in skin development of Smad4 mutants are due to TGF-β signaling, Smad2 and 3, which mediate TGF-β signaling through Smad4, were deleted in murine skin. Smad2 is deleted by crossing a Smad2 conditional allele with Cre transgenic mouse lines that express the protein either in fibroblasts or in the epithelium. Smad3 is introduced through a null allele. We hypothesized that if the skin defects in Smad4 mutant animals were due to defects in TGF-β signaling, and not because of defects in the BMP pathway also mediated by Smad4, then Smad2/Smad3 mutant mice would have similar skin defects as Smad4 mutant animals. The first set of experiments involved Smad2 epithelial null/Smad3 null mutant animals. The mice are severely runted, exhibit abnormal wrinkly, scaly skin, hair loss, and die on day 16-18 after birth. Interestingly, this phenotype is more severe than what is observed in Smad4 mutants. Histological examination of the skin revealed hyperkeratinosis and abnormal hair follicle positioning and cycling. A second set of experiments involved Smad3 heterozygous mice with the Smad2 gene knocked out only in fibroblasts. Smad3 heterozygous mice were used because Smad3 null, Smad2 fibroblast-null animals die before birth. These mice initially appear normal; however, they develop skin and oral cancerous lesions as adults. This finding is in agreement with others who have observed skin and oral lesions in Smad4 mutant animals. Comparison of skin and tumor histology using H&E staining revealed similarities in the phenotypes of Smad4 and Smad2/Smad3 mutants. TUNEL staining, a technique that marks apoptotic cells revealed increased levels of apoptosis in the skin of mutants. Ki67 imminohistochemistry, a marker for dividing cells, revealed cell proliferation abnormalities in the mutants. Masson’s trichrome staining detected decreases in skin collagen fibers in epithelial mutants. Skin lesion progression was visualized microscopically with H&E staining. Lastly, RT-PCR was performed on skin samples and tumors of Smad3 heterozygous, Smad2 fibroblast-null mutant mice to assess the level of TGF-β transcription. Expression of several TGF-β target genes was shown to be up-regulated in tumors of FSP:Cre; Smad2fl/fl;Smad3+/- mice including: fibronectin, MMP-2, MMP-9, Snail, and Smad7.