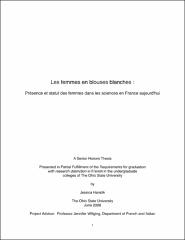 Women in White Coats: The Presence and Status of Women in the Science Professions in France Today

Producing and encouraging creative scientists is a goal that is fundamental to a society's potential for technological advancement and cultural and economic development. However, culturally-prescribed gender roles tend to limit the access that women have to studying science and entering the scientific professions. General trends across cultures tend to demonstrate a lack of women in science, due to systematic, subtle discrimination towards women, especially at the highest levels of science (tenured professors, principal investigators of experiments, deans of colleges, etc), and a culture that discourages females from entering arbitrarily-defined-as-masculine fields such as physics and engineering. Interestingly, there is a statistically significant difference between the percentage of female scientists in France and in the United States, with France being closer to parity. I present the results of interviews with French male and female scientists from all levels of higher education and how their opinions about French culture and tradition correlate with general, gender-specific trends in participation in science. The implications of this research are broad and far-reaching. Currently, the United States is neglecting a large resource when it disregards half the potential population of scientists: female scientists who might bring creativity and diversity to American science. If the United States science community can change the mechanisms by which it implicitly discourages specific subgroups of society from participation, by following the examples set by the more-successful French science community, the number of women, and hence, the diversity of the scientists in the country, will increase. Working toward gender equality in the sciences is a valuable goal, both from the perspective of the inherent fairness of the question, and from the perspective of increasing the innovativeness of the scientific community. Diversity of a group directly correlates to the productivity of that group, whether it be in science, business, education, or society. It hence follows that actively working to increase the diversity of the scientific workforce ought to be a major area of focus for societies whose continued success and improvement depends on the rigor of their scientific production.

College of Arts and Sciences