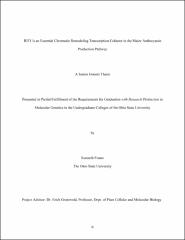 My research centers on the characterization of the transcription cofactor RIF1 in Zea mays (corn). The Grotewold lab has already done extensive research into many of the key transcription factors involved in regulating the production of anthocyanins (red pigments created from the flavonoid pathway), in maize. Previous research by our lab has provided strong evidence that the R and C1 transcription factors are absolutely necessary for the production of anthocyanins in maize. RIF1 is a cofactor that has both an Agenet domain and an ENT domain. The presence of an ENT domain suggests that RIF1 may be involved in chromatin remodeling, as this domain is part of a family of motifs that come from a common predecessor that binds methylated DNA substrates. Due to data from protein-protein interaction experiments, it is believed that RIF1 recognizes the bHLH (basic helix-loop-helix) region of R in order to allow chromatin remodeling and subsequent transcription, although the order of events is still not known. This has potential applications in that there is an analogous situation in humans, wherein the protein BRCA2, which is believed to aid against breast cancer, requires the interaction of a cofactor EMSY to work properly and suppress disease. EMSY and RIF1 are similar in that they both contain an ENT domain (EMSY is actually the source of the name of the ENT domain), and they both homodimerize through this domain. The two proteins are also related in that the Agenet domain of RIF1 is similar to the domains found in other EMSY-interacting proteins. I have already been able to suppress anthocyanin formation with RNAi for RIF1 in microparticle bombardment experiments, thus suggesting that RIF1 is essential for anthocyanin formation (Hernandez Et. Al., PNAS 2007), and I am preparing to investigate the phenotype of RIF1 knockouts obtained from the Maize TILLING Project (http://genome.purdue.edu/maizetilling/OtherProjects.htm). Additional experiments will seek to pinpoint RIF1’s role in chromatin remodeling (if any) by microparticle bombardment experiments with histone deacytalase inhibitors, and also by ChIP experiments using antibodies against RIF1. Yeast two-hybrid experiments will also be carried out to try to identify additional RIF1 partners in maize, perhaps identifying proteins that are recruited to RIF1 in order to carry out chromatin remodeling. The role of other R-interacting factors in maize will also be researched, as well as their corresponding orthologs in Arabidopsis. The resulting thesis will thus present a comprehensive characterization of the maize protein RIF1, and in doing so will provide valuable insight on epigenetics and transcription regulation in general, and on the maize anthocyanin formation pathway in particular, while at the same time shedding light on an analogous protein interaction in humans that could have implications in cancer research.