Effects of dialect and talker variability on lexical recognition memory 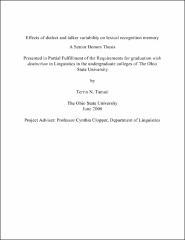