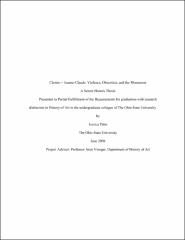 The large-scale environmental and architectural wrappings of the European artists Christo and Jeanne-Claude will serve as the foundation and spring board for my discussion of the meaning of the monument within society, the impact of large-scale public art works, and the aesthetic and intellectual implications of Christo and Jeanne-Claude’s endeavors from the late 1960s up until 2005. Drawing from interviews with the artists, articles from arts and architecture journals, contemporary cultural and art theory, as well as many other interdisciplinary sources, I intend to construct a thesis that examines the visual culture surrounding these controversial works of art and what is at stake with regards to visual culture. Psychoanalytic, philosophical, literary, cultural, and historical disciplines will inform my investigations and support my argument that the monumental wrappings of Christo and Jeanne-Claude (the Christos) connote more than grandiose artistic beauty. Though the artists have been working on such massive projects since the 1960s, discussion of Christo and Jeanne-Claude’s visual and cultural implications has so far been limited to scholars with connections to the artists thus slanting the discourse of the Christos’ treatment of the monument in such a way that the artists find favorable. My inquiries related to their work will not only present a fresh take on their oeuvre, but also contribute to the discourse of visual culture within the higher arts of the late 20th century, discussion of the monument, and exercise interdisciplinary scholarship.