Madison, Henry, and the Protection of Liberty 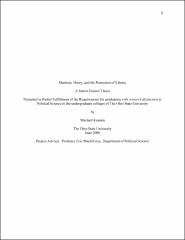 James Madison and Patrick Henry espoused two mutually exclusive systems to protect liberty. These differences came to a head at the Ratification debate in Virginia. The debate ranged over the history of protecting liberty to contemporary theories and political philosophies. Henry argued for a Bill of Rights while Madison argued that a system of strict Enumerated Powers would be the best protection for liberty. Madison had the better theory and won the debate but was forced to add a bill of rights to secure the ratification of the Constitution. This introduced two conflicting theories of protection for liberty that has led to damaging effects for liberty in America. To secure liberty in America, a return to Madison and the Federalists’ stated original intent is needed.