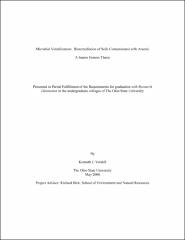 Arsenic pollution is a serious issue that leads to thousands of deaths each year. Bioremediation methods for the removal of arsenic from streams and soils need to be developed. One bioremediation method that has shown promise is microbial volatilization. Volatilization is the process in which certain species of bacteria and fungi transform arsenic compounds into gaseous molecules by biomethylation. These gaseous compounds escape from polluted areas and redistribute across the region in concentrations that are not harmful to humans. The purpose of the experiment is to check the effect that various amendments have on the volatilization rates of naturally occurring communities of soil dwelling microorganisms. Soils were sampled from the field and spiked with an arsenic compound. Various amendments were added to the soils, and the soils were allowed to incubate for 2 weeks in an anaerobic environment. Volatilized compounds were captured in a KI solution and rates of volatilization were compared for each amendment treatment. In addition, a FAME analysis was conducted before and after the experiment to determine the change in microbial community structure caused by each treatment.