The Wild Goose Chase for Consistency in The Confidence-Man 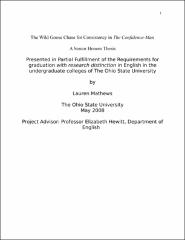 At its original publication in 1857, Herman Melville's novel, The Confidence-Man was treated by critics as both a fragment and a failure due to its lack of a unified plot, access to character interiority, and semantic stability. As such, the central theme in the novel seems to be inconsistency. This study explores how the novel’s inconsistency is not an accident, but deliberate, as the novel insists upon inconsistencies in both characters and semantics as literary realism.