Protein Targeting to the Inner Nuclear Membrane: Possible roles of the ER gene ICE2 and Components of the Spindle Pole Body 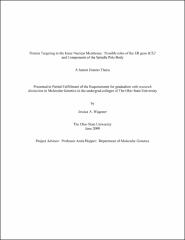 The nucleus is surrounded by a nuclear envelope (NE) consisting of two layers, the outer nuclear membrane and the inner nuclear membrane (INM). The ER is contiguous with the outer membrane and the two layers are connected at the nuclear pores. The INM is an essential structure, consisting of a number of proteins that are involved with the structural organization of the nucleus. Individual components of the NE play important roles in cell biology and human health. Defects in the INM protein, laminA, result in nuclear laminopathies known to cause at least sixty-four independent diseases, including muscular dystrophies and progeria. Despite the importance of the NE, how it assembles and how the structure is maintained is not well understood. It was discovered that the deletion of the ICE2 gene in Saccharomyces cerevisiae caused the mislocalization of a reporter protein, Trm1-II, that normally localizes on the INM (Murthi and Hopper, 2005). Nine proteins that exhibit localization similar to Trm1 were selected for testing to determine if Ice2p plays a general role in targeting proteins to the INM. Through homologous recombination, the ICE2 gene was deleted in strains containing chromosomally encoded candidate proteins fused in frame to GFP. If Ice2p functions in targeting of the candidate proteins to the INM, then the deletion of ICE2 will result in mislocalization of the proteins. So far, six of the nine candidate proteins have been assayed for localization in ICE2 deletion strains. Four have been observed to exhibit wild type localization and Asi1-GFP has been found to mislocalize in strains containing the ICE2 deletion. Also, prior research has shown that spindle pole body (SPB) components may also function in appropriate distribution of Trm1-GFP. In yeast, the SPB is the microtubule organizing center, the functional equivalent of the centrosome. The SPB organizes the mitotic spindle and cytoplasmic microtubules throughout the cell cycle and is anchored in the nuclear envelope. To determine if loss of function of SPB components affects targeting of other INM proteins, I chose the same nine INM proteins that are being used in the ICE2 deletion study. As the SPB components are essential, temperature sensitive mutants were used. Candidate genes were PCR amplified and supplied with a GFP tag for direct visualization as well as a galactose inducible promoter. The cells will be grown in the presence of galactose to induce transcription and then incubated at non permissive temperature (37°C). The cells will then be observed by fluorescence microscopy. In the SPB project, still in progress, the candidate genes are currently being amplified and supplied with an in frame GFP and a promoter. Some candidates were studied for the localization of Trm1p.