United States Decisions with Regards to the Convention on the Rights of the Child and the Two Optional Protocols: Reflections on the Theories of International Law 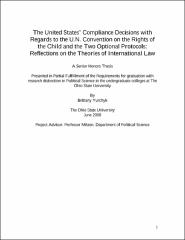 In 1989, the United Nations implemented the U.N. Convention on the Rights of the Child (CRC), the most innovative and comprehensive treaty on children’s rights ever enacted. To date, only two nations have not ratified the CRC: United States and Somalia, the latter of which has no recognized government. Ironically, the United States played a prominent role in drafting the CRC even though it chooses not to ratify. The rationalist camp of international relations scholars would explain this disparity by advancing a state interest perspective on international law. The first part of my thesis will illustrate the rationalist argument- international law is simply a product of states perusing their own interests on the international stage- as well as discuss rationalist’s reflections on the legitimacy of international law (Goldsmith Posner 1998). In the second part of my thesis, my attention turns away from the CRC and towards the Convention of the Rights of the Child Optional Protocols: the Optional Protocol on the Sale of Child, Child Prostitution, and Child Pornography and the Optional Protocol on the Involvement of Children in Armed Conflict. Both Protocols, separate treaties from the CRC, were enacted by the U.N. in 2000. In July of 2002, the United States ratified both Protocols with unanimous advice and consent from the Senate. The United States’ significant break from its non-ratification stance on the CRC produces an interesting puzzle: why would ratification of the CRC be against United States’ national interest but not the CRC’s supplementary Protocols? This puzzle provides counter-evidence to the rationalists’ approach of international law. I argue that the United States’ decision to ratify the Optional Protocols demonstrates that international law is more than a states’ pursuit of their national interests. Using the U.S. ratification decision as support, I advance acculturation as the mechanism responsible for influencing state behavior (Jinks and Goodman 2004). This positive, more normative view of international law is subsidiary development of constructivism, a scholarly camp contrary to rationalism. At the conclusion of my thesis is a brief discussion reflecting on the legitimacy of international law coinciding with a belief in acculturation.