The Associations Among Perfectionism, Rumination, and Affect After Participation in a Cognitive Failure Task 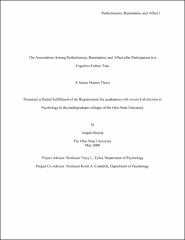