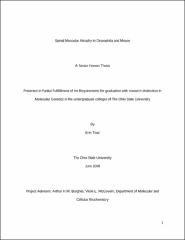 Spinal Muscular Atrophy (SMA) is a recessive genetic disorder that is characterized by selective loss of lower motor neurons and atrophy of muscle. It is the most common genetic cause of infant mortality and is caused by the loss of the SMN1 (Survival Motor Neuron) gene and retention of SMN2, which results in low levels of SMN protein. SMN functions in assembly of Sm proteins onto snRNAs and these RNPs function in splicing. Several mouse models have been developed to study the different types of SMA. Intermediate SMA mice (SMN2 +/+; Smn -/-; SMNΔ7 +/+) live an average of 14 days and express low levels of SMN protein. To investigate if expressing SMN in neurons would increase survival past 14 days, intermediate SMA mice were crossed to mice containing the ChAT-SMN transgene. ChAT-SMN expresses SMN in mature neurons. The results indicate increased expression of SMN in mature neurons does not increase survival of intermediate SMA mice past their normal lifespan. Additionally, we are creating a Drosophila model of SMA to study the effect of Smn missense mutations on survival. Drosophila has one Smn gene and loss of Smn protein is lethal at the larval stage. To investigate the effect of missense mutations on survival, we are introducing them into a Smn null background to see if survival is increased past the larval lethal stage. Patient mutations SMND44V and G279V (D20V and G210V in Drosophila) were chosen due to 100% identity of amino acids between human and fly and the type of SMA they cause in humans. D44V is a mild form of SMA (Type III) while G279V causes a severe form of SMA (Type I). Site-directed mutagenesis was performed to introduce the missense mutations into Drosophila Smn and the gene was subcloned into the pUAST vector. The plasmid will be injected in Drosophila embryos and the resulting flies crossed into the Smn null background. Three additional mutations, V94G, G95R, and Y130C (V72G, G73R, Y107C in Drosophila), were selected to study their effect on survival as well. Site-directed mutagenesis was performed on Drosophila Smn and the constructs remain to be subcloned and sequenced. Based on the results of these experiments, biochemical assays will be performed to determine the level of snRNP assembly in surviving flies to see if there is a relationship between levels of snRNP assembly and the type of SMA. Additionally, mutations that extend the flies past the larval stage will be chosen to create transgenic mice to see if they have a similar effect in mice.