Religious Freedom vs. Equality: A Case Study of the Christian Legal Society 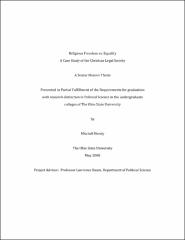 In 2003 the Ohio State University chapter of the Christian Legal Society, a national religious organization of law school students, faced the possibility of losing its status as an officially recognized student group because it refused to abide by the university’s non-discrimination policy in regards to religion and sexual orientation. In response, the organization filed suit against the university claiming that the school was violating the group’s Constitutional rights to choose who is not a member. In the end, the university settled the case by creating an exemption for religious groups; those groups would be allowed to discriminate on the basis of sexual orientation, creed, and religion. In this thesis I investigate the legal arguments for both the university and the CLS as I try to determine what the outcome should have been had the case proceeded to trial. I also analyze the decision-making process and attempt to provide an explanation for how the university reached the decision to create the exemption. The research for this thesis consisted of reading relevant Supreme Court and Federal Courts Of Appeals decisions, gathering press coverage of the incident, and interviewing professors at the Moritz College of Law and university officials. While the research has not yet concluded, evidence thus far indicates that the law was quite uncertain in this issue and the university had a potentially winnable case had it gone to trial. This suggests that there were non-legal influences that played a role in the decision to settle. I conclude by discussing how this case study can help us understand the intricate balance between religion and equality in the legal system today and what universities are able to do in order to protect all students’ Constitutional rights. Advisor: Professor Lawrence Baum