'What's up? Lol!': Optimism and Gender Differences in Social Support on Facebook.com 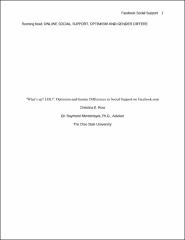 The purpose of this study was to investigate gender differences in the relationship between optimism and social support both received and perceived on the social networking site, Facebook. College students (N=57) completed the LOT-R (Scheier, Carver & Bridges, 1994) and submitted genuine messages received on the website; these messages were then coded by participants and trained third-party coders for three measures of social support: emotional depth, emotional tone, and personal relevance. Results showed no correlation between optimism and online social support, with the exception of males and their perceptions of emotional tone. When receiving messages from other females, both genders perceived greater emotional depth than for male-sent messages, with female recipients perceiving the highest levels. Males also perceived their messages to be more personally relevant than females. These results imply that online social networking messages are not intimate and positive enough to their recipients to elicit associations with optimism levels. Still, it appears that some gender differences present in face-to-face social interactions also apply to online social networking.