Newspaper Content and its Impact on Attitudes toward a Counter-Stereotypical Candidate: An Analysis of the 2006 Ohio Gubernatorial Election 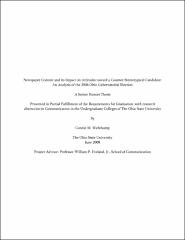