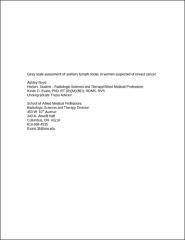 Breast cancer is currently listed as the number two disease in the United States contributing to death in elderly women. Because breast cancer is more prevalent and presents at an advanced stage in older women, less invasive procedures are needed to assess the extent of the disease. Axillary lymph nodes play a major role for staging breast cancer. Ultrasound has the potential to provide noninvasive, non-ionizing, measurements to assess axillary lymph nodes to determine the prognosis of the disease. Fifty four women ages 55 and older were consented for this study. These participants were recruited once they were referred to breast ultrasound following their mammogram. Additional time was allotted for the collection of possibly three axillary lymph nodes, in which the location, size, and shape was recorded. After about 3 months of the patient’s breast ultrasound, a chart audit was conducted to obtain pathological reports. These recorded measurements were then compared with published values of other research studies. A total of 139 axillary lymph nodes were imaged and evaluated. A strong association was found between the shape of the node and the length to diameter ratio (L/D). This comparison between measures had at calculated statistic p-value < 0.000. There was also a strong correlation between the L/D ratio and the morphology of the axillary lymph node which had a statistical p-value < 0.024. This feasible study was designed to explore a potential clinical guideline based on the use of L/D ratio and gray scale morphology to assess the axillary lymph nodes. With continued and expanded research, this technique may be used to screen for possible breast cancer metastases among older women at high risk for breast cancer.