The Bolshevik Campaign against Religion in Soviet Russia: 1917-1932 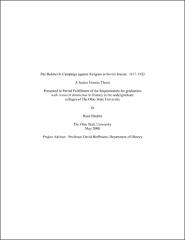 This thesis focuses upon the campaign to eliminate religion in Soviet Russia between the years of 1917 and 1932. In order to decrease the influence of religion in daily life, the Bolsheviks attempted to achieve universal literacy so that the people would be open to a greater variety of information. Universal childhood education would allow the Bolsheviks to instill communist ideals at an early age. Finally, a widespread propaganda campaign would urge the importance of literacy and education as well as the evils of religion. Not until the late 1920's, however, did the Bolsheviks finally begin to experience success in these areas.