Detecting the Debris of Solar System Formation Via Stellar Occultation 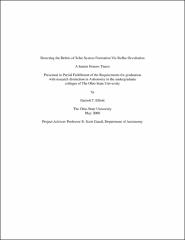 The distant belt of icy objects beyond the orbit of Neptune constitute the leftover construction debris of our solar system's formation, and their physical properties provide key insights to the processes at work in planet formation. Traditionally, these objects have been detected directly via sunlight reflected from their surfaces. This standard method is hindered by the objects' large distances (40 to 10,000 times further from the Sun than the Earth) and small sizes (tens to hundreds of kilometers). Observing the occultation of stars as these objects pass in front provides an alternate method for detecting these objects, bypassing this current impasse to their discovery. When debris crosses in front of a fixed background star, the apparent brightness of the star will be reduced as it is shielded from Earth's view. The magnitude of the brightness diminution depends on the size of the occulter, the apparent size of the star, the Fresnel scale which determines the magnitude of diffraction effects, and the minimum angular separation between the object and the star. The quality of the observation is of course constrained by the detector's sensitivity and sampling rate. By developing a mathematical model, which accounts for all these parameters, the maximum detectable separation between the star and occulter can be determined to produce predictions for the approximate number of potential stellar occultation observations, once paired with the population and size distribution of objects. These two quantities are the unknown and desired functions that can be inferred by a number of stellar occultation events. This model will be applied to the parameters of ongoing and planned occultation surveys to estimate their expected yields, as well as determine whether binary objects, which can provide additional information about planet formation, can also be routinely detected. Support for this project was provided through the Astronomy Department's Summer Undergraduate Research Program.