The effects of dietary nitrogen on symbiotic nitrogen fixation in the eastern subterranean termite, Reticulitermes flavipes 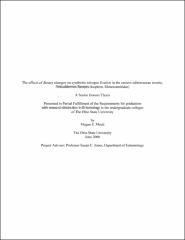 Wood-feeding termites possess symbiotic bacteria that are capable of fixing atmospheric nitrogen to ammonia. This bacterial process is not only central to termite nutrition, but it also has tremendous ecological importance as fixed nitrogen is often a limiting nutrient in terrestrial ecosystems. However, nitrogen fixation is energetically costly, and we therefore hypothesized that a high nitrogen diet would reduce termite dependence on symbiotic nitrogen fixation. This was tested by rearing workers of the eastern subterranean termite (Reticulitermes flavipes) on three food substrates—pine wood, pine needles, and aspen leaves—that differed significantly in percent nitrogen (0.07, 0.36, and 0.93% nitrogen, respectively). Termite and representative food samples were analyzed using an isotope ratio mass spectrometer. A mixed model equation was applied to determine the percent nitrogen derived from the atmosphere within each termite sample. Initial results indicated that nitrogen fixation rates are plastic within R. flavipes and they are negatively correlated with dietary nitrogen, as hypothesized. A follow-up study was conducted to investigate three assumptions associated with the initial experiment. The first assumption is that only nitrogen concentration, and not the nitrogen source (i.e. amino acids, urea, etc.), affects nitrogen fixation rates. This assumption is problematic as previous studies suggest that nitrogen fixation in R. flavipes is differentially affected by ammonium nitrate and urea. This is consistent with the observation that ammonium inhibits transcription of the nitrogenase enzyme that is responsible for nitrogen fixation. Second, because the isotope discrimination factor occurring as a result of digestion, Δdig, is not known for R. flavipes, it was estimated by assuming that termites reared on the aspen leaf diet (highest percent nitrogen) did not fix any atmospheric nitrogen. Our estimates of Δdig ranged from 4.1 to 6.9, which are slightly higher than those reported in the literature for other termite species (~3.4 to 5.8). Third, as the isotope discrimination factor occurring as the result of nitrogen fixation, Δfix, was never calculated for any termite species, Δfix was assumed to be within the range of nodulating plants (-2 to 0). The second set of experiments addressed these issues by inhibiting nitrogen fixation in groups R. flavipes workers via force feeding the antibiotic kanamicin. Both antibiotic-treated and control (nitrogen-fixing) termites were then exposed to different concentrations of either urea or ammonium nitrate. By comparing the difference between the δ15N signatures of antibiotic-treated termites and their food sources, we calculated that Δdig = 2.264. Similarly, by comparing the δ15N signatures of antibiotic-treated termites with control termites, we determined that Δfix was equal to -1.125. Using these calculated values for Δdig and Δfix, a strong negative correlation between dietary nitrogen and symbiotic nitrogen fixation was evident for termites reared on urea and ammonium nitrate. These studies represent the first attempt to employ stable isotopes to study nitrogen fixation in R. flavipes and therefore significantly extend what is known about symbiotic nitrogen fixation and the role that this termite plays in nutrient cycling.