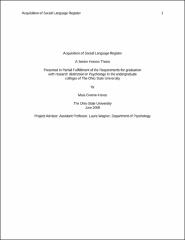 Different people are spoken to in various ways depending on the social context. The term 'register' refers to the intonation used, as well as specific words and phrases used in these various conversations. It is important to discover how this capability is developed in children, as well as discovering the point of development at which this skill is acquired. Previous research suggests that children comprehend and use different registers by the time they enter elementary school (Ravid & Tolchinsky, 2002). Additionally, it is likely children are able to comprehend various registers before they correctly use language registers in their own speech. Three studies tested a total of 138 children (3-year olds, 4-year olds, and 5-year olds). Participants were shown a puppet and four photographs of different people: a teacher, a baby, a light-haired female peer, and a dark-haired female peer. Participants then listened to audio stimuli of the puppet asking questions to the people in the photographs in corresponding registers. The registers used were the formal register, informal register, and babytalk register. An additional stimulus was spoken in Spanish and used as a control. Participants were asked to identify the photograph with which it corresponded. In some cases, participants were asked to explain their reasoning behind the matches they chose. Overall, the results showed that 3-year olds were unable to correctly differentiate between various registers, 4-year-olds were more successful, and 5-year-olds could easily complete the task. However, based on the justifications of the 5-year olds’ choices, it appeared that 5-year olds were unable to explain the differences between registers.