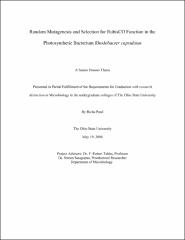 Ribulose 1, 5-bisphosphate carboxylase/oxygenase (RubisCO) catalyzes a reaction of fundamental importance, the incorporation and reduction of atmospheric carbon dioxide into organic matter. This enables organisms to grow autotrophically, that is at the expense of CO2 as the sole carbon source. Despite its key role, all RubisCO enzymes found in nature are plagued by their susceptibility to inhibition by oxygen and are among the most sluggish biological catalysts found in nature. Based on the sequence of its component amino acids, RubisCO has been classified into four molecular forms: form I, form II, form III, and form IV (RubisCO-like proteins, RLPs). Whereas enzyme forms I, II and III catalyze CO2 fixation, the form IV proteins cannot perform this function, presumably due to the absence of appropriate active-site residues. Substitutions were made in the Cholorobium tepidum RLP (CtRLP) active-site residues to reflect their identities in bonafide RubisCOs (Mut) but they had no effect on the RLP’s ability to function as a RubisCO. Additional secondary structural changes had also been introduced in the CtRLP by deleting a CD loop that is absent in RubisCOs and by inserting a β-hairpin structure that is absent in RLPs (MutCD∆βH). Yet after all the changes were introduced, no RubisCO activity was observed (1). Thus, as a part of this research thesis, the DNA encoding MutCD∆βH was randomly mutagenized and bioselection was carried out in Rhodobacter capsulatus, SB I/II-, a RubisCO knockout strain, to select for mutations that may complement for RubisCO activity. Apart from RLPs that are completely devoid of RubisCO activity, there are functional differences even among forms I, II and III. Upon sequence comparisons, residue 165 of Rhodopsuedomonas palustris form II RubisCO was identified as a unique active-site residue that was divergent among the three forms of RubisCO (threonine in form I, isoleucine in form II and valine in form III). In order to examine the importance of this residue for RubisCO function, it was substituted with an alanine (a neutral substitution), threonine (resembling form I RubisCO) or a valine (resembling form III RubisCO) in the form II RubisCO (cbbM) from R. palustris. To assess the functional competency of these mutants, they were complemented in the RubisCO knock-out strain of R. capsulatus, strain SB I/II-. Whereas the I165A and I165T mutants were unable to support growth under photoautotrophic conditions, the I165V enzyme could. To identify other regions in the protein structure that could complement the negative phenotypes conferred by I165A and the form-I-like I165T substitutions, random mutagenesis and bioselection in R. capsulatus SBI/II- was performed with I165A and I165T mutant genes. It has been possible to identify an A165V substitution as a pseudo-revertant of the original I165A mutant. However, it was not possible to identify other potential suppressor mutations. A problem was identified with the methodology that could likely interfere with the efficient recovery of suppressor mutations. Once this problem is resolved, the suppressor recovery and analysis will likely reveal other residues that play a vital role in the function of the enzyme.