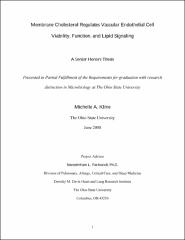 Membranes, including the plasma membrane, consist of phospholipids and cholesterol, which dictate their fluidity and the structural and functional integrities of the mammalian cells. Membrane cholesterol, especially the lipid raft-associated kind, has been emerging as one of the pivotal players among membrane lipids in modulating the cellular signaling cascades, which regulate normal cellular functions and pathophysiological events. Endothelial cells (ECs) of blood vessels are critical in the maintenance of the vascular tone, homeostasis of the blood vessel, and proper function of the cardiovascular system. Cholesterol of the vascular ECs is being recognized as an important element in the vascular EC signaling that dictates cellular replication and cell death. Therefore, here, we hypothesized that the membrane cholesterol would be a key player in maintaining the viability, functions, and lipid signaling of the vascular ECs. In our preliminary studies, to test our hypothesis, we had chosen three different widely used ECs in culture, including the bovine pulmonary artery ECs (BPAECs), bovine lung microvascular ECs, and human umbilical vein ECs as the model ECs. We then subjected these cells to the removal of membrane cholesterol by the treatment of two well established cholesterol-depleting agents, cyclodextrins, methyl-β-cyclodextrin (MβCD) and hydroxypropyl-β-cyclodextrin (HPCD) and had chosen that the BPAECs would be used as the model ECs for the entire study. Following the treatment of BPAECs with two different widely used concentrations of MβCD and HPCD (2% and 5%, wt/vol to deplete cellular cholesterol) for 15-120 min, the loss of membrane cholesterol, cell viability, and cell morphology were determined. Membrane cholesterol was determined in the cells by the spectrofluorometric method. Lactate dehydrogenase (LDH) released into the medium was determined by the spectrophotometric method. Cell morphology was examined by light microscopy. The results revealed that both MβCD and HPCD caused significant and striking dose- and time-dependent loss of membrane cholesterol, loss of cell viability, and altered cell morphology in all the three chosen EC systems including the BPAECs. However, MβCD appeared to cause greater loss of membrane cholesterol, cell viability, and cell morphology as compared to the extent of the same caused by HPCD, under identical conditions, in all the chosen EC systems including the BPAECs. On the other hand, filipin (1-10 μM; as positive control), a fungal natural product, which sequesters but does not remove membrane cholesterol, caused only loss of cell viability in BPAECs without inducing the loss of membrane cholesterol. In conclusion, the results of this study showed that the membrane cholesterol was an important player in maintaining the cell viability and morphology in the vascular ECs. Removal of cholesterol by cyclodextrin (especially MβCD) treatment, apparently caused loss of fluidity of the cell membrane and leakage of vital cellular components, and thus caused loss of cell morphology in BPAECs. Also, the study offered a safer method of removal of cholesterol by utilizing HPCD, without causing extensive loss of cell viability as seen with the MβCD treatment, for studies to investigate the role of lipid raft-associated cholesterol in cellular functions. Phospholipases play important roles in cellular signaling during normal and pathophysiological states. Phospholipase D (PLD) is one such cell signaling phospholipase, which generates potent bioactive lipids such as phosphatidic acid, diacylglycerol, and lysophosphatidic acid from the membrane phospholipids. Here, we also hypothesized that membrane cholesterol (including the raft-associated form) would also modulate the lipid signaling PLD in the vascular ECs. Hence, we tested the modulatory effects of MβCD- and HPCD-assisted cholesterol removal on the 12-O-tetradecanoylphorbol-13-acetate (TPA)-induced (through protein kinase C [PKC] activation), diperoxovanadate (DPV)-induced (through protein tyrosine kinase [PTyK] activation), and oxidant (H2O2)-induced PLD activation in BPAECs. Our results revealed that the two chosen cyclodextrins (MβCD and HPCD), differentially regulated the TPA-, DPV-, and oxidant-induced activation of PLD in BPAECs, suggesting that PLD responded to the differential removal of cholesterol and cellular effects (activation of upstream signaling kinases, PKC and PTyK) induced by MβCD and HPCD. Overall, this study established the importance of membrane cholesterol in vascular EC integrity and lipid signaling. Advisor: Narasimham Parinandi, Ph.D.