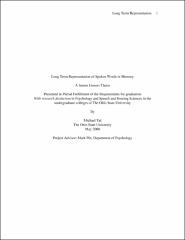 Words in casual speech are highly variable. People are able to understand multiple versions of spoken words without much difficulty. There are two general types of models which attempt to address this issue. Prototype models assert that frequency of words in a language is not a significant factor in recognizing words, and when people listen to words they will access some kind of abstract form of those words in their mind. If the form of the word matches what they have stored in memory, then they recognize the word. Exemplar models assert that word frequency is important, and all variations of words are stored in memory. This would aid in word recognition as a person has all variants of words in memory. For example, if a person heard a variant of a word that they did not have in memory, then they would not recognize it. The experiment detailed attempts to explain how a person processes spoken words as they hear them. This experiment uses a repetition priming paradigm, in which participants heard one block of words with variants of words (such as “buTTer” or “buDDer”), then subsequently listened to a second block of words identical to the first block. The difference between blocks is in the second block the words presented are in their assumed underlying form, such as in “buTTer” (as opposed to “buDDer”). The results of this experiment may impact how researchers may create or modify current models of word recognition. Additionally, this may aid scientists in modifying human and automatic speech recognition systems.