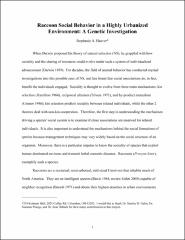 Raccoons are heavily studied due to their importance as fur bearers, nest predators, and transmitters of zoonotic diseases such as distemper and rabies. Yet despite many investigations little is known of their social behavior because of their nocturnal, secretive habits. Raccoons are often described as solitary and intolerant of conspecifics, but instances of group foraging, den cohabitation, and male coalitions have been documented. Factors responsible for this selective sociality remain unknown. The theory of kin selection states that cooperation and sociality easily evolve between related individuals, and indeed, many species that are selectively social associate with kin. However, reciprocation theory and the theory of resource abundance have also been used to explain the sociality of certain species. Therefore, the purpose of this research is to discern if relatedness is a major factor in raccoon sociality. This study was conducted in a Forest Preserve park in suburban Chicago where over 1.5 million visitors may attend the park annually, leaving substantial amounts of refuse behind. Raccoons within the park were trapped, anesthetized, aged, weighed, radio collared, and blood was drawn for a genetic sample. Blood samples were analyzed using PCR techniques and 16 highly variable microsatellites. Relatedness values were calculated using the software KINSHIP. The radio collars used for this study were equipped with newly developed proximity detecting capabilities. Proximity detectors are equipped with both VHF (very high frequency) and UHF (ultra high frequency) signals which allows for traditional telemetry but also have the capability to record when two or more individuals "contact" each other. A contact is defined as when two or more individuals come within one meter of each other. The collars will also record the date and time contact was initiated, the duration of the contact, and the id number of the contacted collar. Contacts are stored in the collar's internal memory until data can be downloaded via interface and portable computer. These contact data, along with home range and distance between home range estimates were analyzed in relation to relatedness values. Relatedness values between females (FF) were significantly higher than those between males (MM), or between females and males (MF). This result is indicative of male dispersal which has been suspected for urban raccoons, but never confirmed with a genetic investigation. Percent home range overlap and distance between home ranges did not correlate with genetic relatedness. Contact rates were neither higher nor lower among related individuals. Additionally, 605 instances of den sharing were recorded of which 458 occurred between unrelated individuals (182 MM, 219 MF, 57 FF) The results of this study contribute to a growing number of species that have social associations with non-kin. These results yield important empirical evidence for the theoretical study of how social behavior evolves. Additionally, wildlife managers and public health officials may be aided by this knowledge as it relates to one of the most abundant, and often problematic, North American mammals.