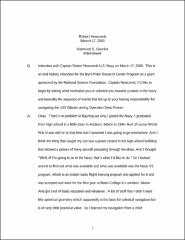 Robert Newcomb served as Navigation Officer on the icebreaker USS Glacier during both Operation Deepfreeze I and II to Antarctica. In 1947 he was commissioned an ensign in the U.S. Navy, and while assigned to the aircraft carrier, the USS Kearsarge, was introduced to the science of navigation, an interest he pursued for his entire career. After one year he was named executive officer and navigator, and later commanding officer, of the minesweeper, the USS Pigeon, during which time he mastered dead reckoning, as well as celestial and electronic navigation. In 1955 Newcomb was named navigator of the USS Glacier, one of the largest and most powerful icebreakers built at the time. Its first assignment was to proceed to McMurdo Sound in Antarctica, with earlier stops en route at Panama and New Zealand. The voyage was very rough in the far southern waters; the ship would roll 65 to 70 degrees, but it performed splendidly. Patrick Maher was the Commanding Officer and was an experienced and effective skipper, well liked by his entire crew. Apart from Captain Maher, few of the crew had had any previous experience in Antarctica. The Glacier also transported several important scientists who planned to study flora and fauna in the oceans and on ocean bottoms. By and large the military and civilian personnel worked well together, although Newcomb noticed occasional minor tension between Admirals Dufek and Byrd. As the ship approached Antarctica, navigation through the ice fields was a great challenge. Celestial navigation was useless in an environment of near or total day light, as were magnetic compasses that far south. Dead reckoning had to be used. This too was challenging due to the need for constantly changing directions as the ship plowed through the ice. Another difficulty was that during Deepfreeze I and II most of the nautical charts were made from aerial photographs that did not show the depth of water. At times the ship had to break through ice ten to twelve feet thick. On Deepfreeze I the icebreaker initially could not get within six miles of McMurdo Station, and the cargo had to be offloaded onto the ice for transport to the base. This too could be risky; once the driver of a D8 tractor fell through the ice to his death. The buildings for the base were pre-fabricated, and were assembled by Navy Seabees. No serious construction problems were reported. As for the scientists, they got busy immediately on their research projects. Once the ship was unloaded, the Glacier moved about and broke ice for others as a need arose. It was called upon to free a New Zealand ship, the Endeavor from the ice. Much work was also done on taking soundings and updating navigational charts. Similar tasks were undertaken during Deepfreeze II. As a result of his excellent service in Antarctica, a small bay there was named in his honor. In the years since his service in Antarctica, Newcomb has maintained contacts and friendships with many of his colleagues from the two expeditions. He does not recall, however, that his service there had any great impact on his subsequent naval career. He regards the greatest accomplishments of his navy career as commanding a minesweeper at age 27, serving as commanding officer of a destroyer, and being the navigator of the Glacier. Major Topics Service aboard the icebreaker USS Glacier during Operations Deepfreeze I & II Typical icebreaker challenges: Unloading cargo, navigation, moving through ice Anecdotes from his days in Antarctica Newcomb’s long career as a naval officer