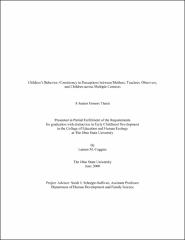 Studies have shown that children showing signs of behavior problems early in life are at considerable risk for continued behavioral disturbances throughout childhood (Winsler & Wallace, 2002). A significant tool in early identification and prevention is assessment of the child’s behavior - often provided by parents, teachers, and observers. Assessments of child behavior benefit highly from multiple informants; however, the degree to which agreement is achieved among informants is important in order for them to be considered a significant tool. Mothers in 113 families completed questionnaires concerning their perceptions of their preschool aged child’s behavior, and their 3-5-year-old child was observed while they worked on an activity together with their parents. The child’s behavior during the activity was coded by trained observers. Children also reported on their perceptions of their psychological self-concepts. Furthermore, the children’s preschool or kindergarten teachers were mailed questionnaires in order to gain an additional perspective on the child’s behavior. The questionnaire and observation process was repeated again one year later and data collected from each phase of the study were used in my investigation. Results indicated greater agreement between all informants for more easily observable behaviors like anger and aggression, persistence, and activity level. Greater agreement was also found for boys than for girls, for more overt behaviors as well as internalizing behaviors and characteristics (e.g., timidity, anxiety). Results concerning the role of child age and day care experience in informant agreement were less clear.