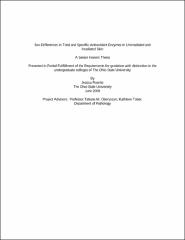 Nonmelanoma skin cancers have been reported to be more predominant in the male gender with the incidence of basal cell carcinoma and squamous cell carcinoma in males being two and three times the incidence in females respectively. Until recently these differences have been attributed to lifestyle variations amongst men and women in which men seem to spend more time outside while using less sun protection. Our laboratory and others have established a correlation between UVB-induced cutaneous inflammation and tumor susceptibility in the skin of female mice. These findings were compared to male mice in a recent study done by Thomas-Ahner et. al. (Cancer Research 2007) in our lab to evaluate the gender differences in UVB-induced skin carcinogenesis, inflammation, and DNA damage. Using the Skh-1 mouse model, Thomas-Ahner found that under equal doses of UVB exposure, male mice tend to have an accelerated tumor progression, less of an inflammatory response, more cutaneous oxidative DNA damage, and lower antioxidant levels compared to the female mice. The goal of the current study was to continue the ongoing investigation into the gender disparities by examining the temporal and gender differences in UVB-induced inflammation and the total and specific antioxidant enzymes, including catalase, glutathione peroxidase, glutathione s-transferase, and glutathione reductase, after a single exposure to UVB. We found that UV-induced cutaneous inflammation increased in both genders but to a greater extent in females. We also determined that catalase was lower at baseline in male skin and decreased equally in both genders after UV; there were no significant gender or UV mediated differences in superoxide dismutase or glutathione reductase; glutathione peroxidase and glutathione s-transferase were lower at baseline in male skin and 2 glutathione s-transferase decreased in the skin of both genders after UV exposure while glutathione peroxidase only decreased in males after UV exposure. These results demonstrate that there are specific inherent differences in the skin of the genders. Furthermore these studies suggest that males may not be able to ward off cutaneous DNA damage as well as females due to the lower antioxidant activities found in male skin in both unirradiated skin and after UV exposure. Taken together, the results from our current and our published studies suggest that there is a possible biological explanation for the higher levels of skin cancer in men.