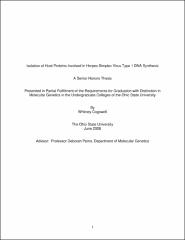 Herpes simplex virus type 1 (HSV-1) is the prototypic member of a large family of viruses known as Herpesviridae. Herpesviruses possess a double-stranded DNA genome and infect a broad range of species. In addition to HSV-1, there are seven other herpesviruses that are known to infect humans. Although antiviral treatment is available for HSV infections, there are few or no options for treatment of infections by other herpesviruses. One of the best targets for development of new antivirals is the viral DNA replication apparatus. HSV-1 encodes for seven proteins directly involved in viral DNA replication. However, no HSV-1 origin-dependent DNA replication has been reconstituted in vitro using purified viral proteins. It is hypothesized that proteins (host and/or viral) in addition to the seven known viral DNA replication proteins are involved in viral DNA replication in vivo. Moreover, it is predicted that such proteins would interact with one or more of the viral DNA replication proteins. In an effort to identify interacting host proteins, co-immunoprecipitation analysis was performed using antibodies specific for an essential HSV DNA replication protein, UL42, the polymerase processivity factor. Extracts from infected and mock-infected cells were immunoprecipitated with the UL42 antibody. UL42, and all that is bound to it, bind to the antibody which binds to the Protein G agarose matrix. Those proteins that are specifically pulled down from infected cell extracts, but not from mock-infected extracts, were to be identified by mass-spectrometry. The immunoprecipitates were analyzed following separation on denaturing polyacrylamide gels. Gels were silver-stained or analyzed for the presence of UL42 using a Western blot. Conditions were adjusted to optimize the amount of UL42 immunoprecipitated, but UL42 could not be immunoprecipitated quantitatively. Following immunoprecipitation under optimum conditions, no differences were observed between the proteins pulled-down from mock- or infected-cell extracts. Due to the poor ability of the antibody to pull-down UL42, a second approach was employed. A histidine-tagged version of UL42 was purified using a nickel chelating column and then mixed with infected or mock-infected cell extracts. Those proteins that specifically interact with his-UL42 were expected to bind to a nickel column. However, nonspecific interactions with the matrix were observed and prevented identification of proteins by mass-spectrometry.