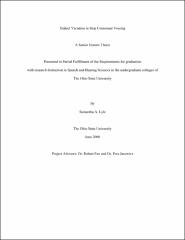 Recent sociophonetic research has shown significant differences in the pronunciation of vowels among dialects. However, dialectal differences in stop consonant productions have not been as widely researched. This study examines the differences between speakers from south-central/southeastern Wisconsin and westernmost North Carolina, specifically in terms of the way the voiced stop /b/ is produced. Twenty female speakers were selected from recordings, ten from Wisconsin and ten from North Carolina. Each subject read two sets of thirty sentences that included five sets of target words. Acoustic measurements of the consonant /b/ and the target word itself were completed. From these measurements the following variables were calculated: closure duration, word duration, proportion of closure duration to word duration, duration of voicing during closure, proportion of voicing in closure and frequency of complete voicing through closure. The results of these analyses show there are significant differences in the ways the consonant /b/ is produced in Wisconsin and North Carolina. The greatest differences were found in the total duration of voicing during consonant closure, proportion of voicing in closure and the proportion of times the stop closure was completely voiced. The present results provide a comprehensive set of data for a detailed dialect comparison of stop production in these two dialects of American English.