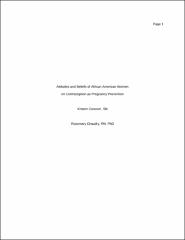 Attitudes and Beliefs of African American Women on Contraception as Pregnancy Prevention / Kristen Conover. Purpose: To understand the knowledge, attitudes, and beliefs of young African American women, ages 19-24 regarding contraception as pregnancy prevention. Background: Many studies have reported decreased disparities in adverse birth outcomes for minority women. However, African American women in Ohio are showing little or no improvement (Ohio Department of Health, 2006). Compared to women over 20 years old, teenagers age 13-19 are at increased risk for adverse birth outcomes such as pregnancy-related anemia, gestational hypertension, pre-eclampsia and premature delivery (Goonewardene & Waduge, 2005). A recent decline in overall teenage pregnancy rates from 1991-2003 was due largely in part to an increased use of contraception. However, the rate of pregnancies in black adolescents was two and a half times higher than their non-Hispanic white counterparts (United States Department of Health and Human Services, 2000). Previous research has shown that a disconnect between information in a health care message and the knowledge level of the audience affects health behaviors (Mark, 2005). This disconnect may help explain the lack of decline in African American teenage pregnancy rates. Theoretical Framework: This study is based on the Life Course Health Continuum (Halfon, Russ, & Regaldo, 2005) continuum which states: 1) health is a continuum impacted by experiences across the life span, 2) experiences provide a context for health behaviors and health status, and 3) positive health outcomes are maximized by increasing the competence of the individual. Research Questions: 1. What are the knowledge, attitudes, and beliefs of young African American women age 19-24 (African American) regarding contraception as pregnancy prevention? 2. What are some of the issues raised by these young women for and against contraception as pregnancy prevention? 3. What advice would young African American women give to African American teenagers on how to stay healthy? 4. Do particular perceptions vary by geographical location? Subjects: African American women ages 19-24 from Northeast, Central, and Southwest Ohio (n=41). Methods: Data for this qualitative study were collected through focus groups. Participants were recruited through churches and other community organizations. The semi-structured focus groups addressed health care issues regarding contraception and pregnancy as well as other topics relevant to preconception and interconception care for young African American women. The discussions were digitally recorded and analyzed through content analysis with categorizing of phrases and statements into themes and patterns for each topic area. Members of the research team independently code data and validate emerging themes and patterns. Results: Six major themes were elicited from the data analysis based on the six research questions asked in the focus group discussions. (1) Methods mentioned to prevent pregnancy were most frequently condoms and abstinence, and there is a lack of knowledge on more long-term methods such as intrauterine devices. (2) The reasons young African American women do not prevent pregnancy to preserve a future for themselves. (3) Methods mentioned to prevent sexually transmitted infections leave the situation out of the woman’s control. (4) The reasons young African American women do not prevent sexually transmitted infection reflect a lack of knowledge and partner pressure. (5) The reasons young African American women choose not to have sex are for short term prevention of pregnancy and sexually transmitted infections, not to preserve the potential for long-term goals. (6) Advice that young African American women would give to African American teenagers on how to stay healthy focus on health, staying in school and avoiding boys and sex. Overall responses did not vary by region. In some circumstances there were regions that had unique responses which have been indicated and taken into consideration in the data analysis. Implications: Results of this study can be used to develop culturally sensitive health care messages that nurses can implement in patient teaching with young African American women and teenagers to reduce adverse birth outcomes for African American women and babies.