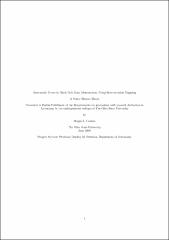 Active galactic nuclei (AGNs) are extremely energetic central regions of galaxies whose brightness cannot be attributed to stars alone. A typical AGN emits at least the same amount of energy that is emitted by an entire galaxy of stars, but in a much smaller volume. The basic paradigmatic model of an AGN is a dense gaseous disk through which matter is actively accreting onto a central supermassive black hole. This is surrounded by a region of relatively dense broad-line emitting clouds and then, further out, a region of relatively low-density narrow-line emitting clouds, known as the broad-line region (BLR) and narrow-line region (NLR), respectively. The disk is adding mass to the black hole and, in the process, releasing radiant energy; this region is often referred to as the "central engine". The BLR is relatively near to the central engine, and it is thus a useful probe of this central region. One technique used to explore the BLR is reverberation mapping, which can reveal the structure and kinematics of the emission-line gas. The goal of this project is to explore how a measurement of the black hole mass, using reverberation mapping, within an AGN changes due to systematic effects inherent in using both a wind-based AGN model, as well as combination disk+wind model. This aim is to address two specific questions. First, how does the black hole mass measurement change when we characterize such a region by only two numbers that characterize the velocity dispersion of the emitting gas and the mean reverberation response time? The BLR is a complex region and we seek to determine how much information one loses through a simplified characterization. Second, how does the geometry of the wind affect the measurement of the black hole mass? Specifically, we explored the effects of changing the opening angle of a conical wind and its inclination with respect to an Earth-based observer. These questions are important to help discern the structure of the BLR. This model will help to gather intuition about how the geometry and kinematics of the BLR affect a black hole mass measurement obtained through reverberation mapping.