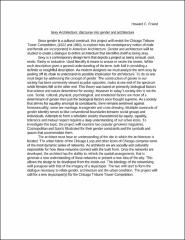 Since gender is a cultural construct, this project will revisit the Chicago Tribune Tower Competition, (1922 and 1980), to explore how the contemporary notion of male and female are incorporated in American Architecture. Gender and architecture will be studied to create a dialogue to define architecture that identifies itself as being sexy. Sexy is a contemporary design term that depicts a project as being sensual, cool, erotic, flashy or seductive. Used literally it means to arouse or excite the senses. While each description gives a general understanding of the term, both fail in providing a definite or insightful description. As modern designers we must analyze the term sexy by peeling off its cloak to understand its possible implication for architecture. To do so one must begin by addressing the concept of gender. The construction of gender in our society has been commonly viewed as polar opposites, males at one end of the spectrum while females fall at the other end. This theory was based on primarily biological factors that science and nature determined for society. However in today’s society this is not the case. Social, cultural, physical, psychological, and emotional factors are more of a determinant of gender then just the biological factors once thought supreme. As a society that strives for equality amongst its constituents, there remains sentiment against homosexuality, same sex marriage, transgender and cross dressing. Multiple constructs of gender identity serves to blur conventional boundaries between social groups and individuals. Attempts to form a wholistic society characterized by equity, equality, tolerance and mutual respect requires a deep understanding of our urban icons. To investigate this topic, the project will examine two popular gendered magazines, Cosmopolitan and Sports Illustrated for their gender constraints and the symbols and spaces that accommodate them. The architect must have an understanding of the site in which the architecture is located. The urban fabric of the Chicago Loop and other icons of Chicago comprise some of the most dynamic series of networks. As architects we are socially and culturally responsible for how these networks connect with the built form. Once the networks are developed, the architect has the ability to rethink the spatial arrangements, that is generate a new understanding of these networks or present a new idea of the city. This allows the design to be developed from the inside-out. This ideology of the networking will juxtapose with that of the imagery of a skyscraper. The two will start to form the dialogue necessary to relate gender, architecture and the urban condition. The project will call for a new skyscraper(s) for the Chicago Tribune Tower Competition.