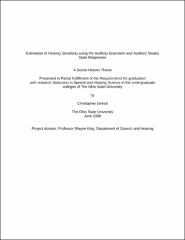 The Auditory Brainstem Response (ABR) and the Auditory Steady State Response (ASSR) are evoked electrophysiologic responses, which are used to estimate hearing sensitivity and assess the integrity of the auditory system. The two techniques differ in the nature of their evoking stimuli and therefore potentially in the quality of the diagnostic information they yield. The ABR utilizes short duration stimuli (<5 msec) while the ASSR response is evoked with long duration (~1000 msec) stimuli modulated in amplitude, frequency, or both. The ABR has been in clinical use since the 1970s and has a substantial literature to support its efficacy, while the ASSR is a relative newcomer and comparable efficacy to the ABR has not yet been established. In particular, there is still a paucity of data demonstrating whether the ASSR is a better predictor of pure tone thresholds than the ABR. The present study investigates this by acquiring pure-tone audiometric results, ASSR thresholds, and ABR thresholds in a sample of 9 normal-hearing young adults. Subsequent to inclusionary testing, ASSR and ABR thresholds were estimated at 1, 2, and 4 kHz using a two-channel differential recording. Blackman-windowed tonepips were utilized as the basis for both ABR and ASSR data acquisition. If both recording channels were considered and the tonepip stimuli were equated for peak-equivalent SPL, the ASSR and ABR thresholds showed no effect for frequency. However, there was no evidence of a significant correlation between the ABR and ASSR thresholds. The ABR recordings were more consistent across the two channels than the ASSR waveforms. Further, the ASSR revealed a non-monotonic relationship between the number of acquisitions and response detectability, while the wave V SNR in the ABR was essentially a monotonically increasing function of the number of acquisitions. There is no compelling evidence based on this study that the ASSR offers any clear advantage over the currently-established auditory brainstem response.

Colleges of Arts and Sciences and Social and Behavioral Sciences, The Ohio State University