"Great Hope and Great Faith and Mainly Determination": The Survival of the Cleveland Community Project in a Climate of Failure, 1964-1965. 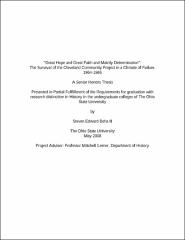 Located in Cleveland, Ohio, the Cleveland Community Project was an organization sponsored by SDS's Economic Research and Action Project (ERAP). Unlike most ERAP chapters, it lasted more than the two years of the national program. If one looks at the Cleveland ERAP chapter it is possible to find small victories of political voice that may have been consolidated to create a thriving, self-sufficient organization to mobilize Cleveland’s poor community. At this one site, the organizers learned from the poor and adjusted their plans accordingly to create lasting programs and relationships. The impact those students and organizers had on the poor communities of Cleveland cannot be measured by the fiscal failure of ERAP; rather, they should be judged by the successes they produced in spite of insufficient human and financial resources. It is hard to quantify how ERAP in Cleveland influenced the poor community over a long period of time. However, the evidence that has survived indicates that in the short period of time that the student organizers were in Cleveland, welfare mothers gained a political voice, the students were accepted as equal members of the poor community, and the seeds were planted for future activism and social change.