Binaural Versus Monaural Listening in Young Adults in Competing Environments 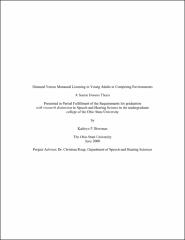 Binaural speech recognition abilities in a group of young adults with normal hearing were analyzed through dichotic listening and word recognition in noise tasks. Dichotic listening was tested under three conditions: free-recall, directed right, and directed left. Word recognition in noise was also tested under three conditions: binaural, monaural right, and monaural left. For the dichotic listening task, subjects exhibited a small right ear advantage (REA) under the free-recall condition, an even larger REA under the directed right condition, and a small left ear advantage (LEA) under the directed left condition. For the words in noise task, subjects exhibited similar scores for the binaural and monaural left conditions; monaural right scores were slightly worse. Results were compared to older adult data previously gathered for both dichotic listening (Roup et al., 2006) and word recognition in noise (Wilson, 2003) tasks. While the young adults exhibited a REA in the free-recall condition, the older adults exhibited an even greater REA. This suggests that there is an age related change in auditory processing that interferes with the ability to integrate the signals entering both ears in dichotic situations. For the words in noise task, both groups did worse as the signal-to-noise ratio decreased. However, young adults scored significantly better than the older adults overall. This suggests that younger adults are better able to separate a signal from background noise than older adults.