An Essay on Continued Fractions 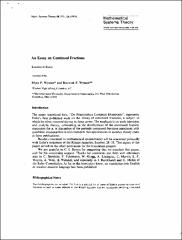 The paper translated here, "De Fractionibus Continuis Dissertatio", represents Euler's first published work on the theory of continued fractions, a subject to which he often returned during his long career. The emphasis is on basic identities and analytic theory, culminating in the development of the continued fraction expansion for e. A discussion of the periodic continued fractions associated with quadratic irrationalities is also included, but applications to number theory come in later publications. Readers interested in mathematical system theory will be concerned primarily with Euler's treatment of the Riccati equation, Sections 28-33. This aspect of the paper sewed as the chief motivation for the translation project. We are grateful to C. I. Bymes for suggesting that we translate this paper. and for his continuing support. Thanks for comments and help with references also to C. Bernlohr, P. Fuhrmann, W. Gragg, A. Lindquist, C. Martin, L. F. Meyers. A. Weil, H. Wimmer, and especially to 1. Burckhardt and G. Mislin of the Euler Commission. As far as the translators know, no translation into English or another modern language has been published.