Cultivating the Farm Bill: The Effect of Print Media Communication on Agricultural Legislation 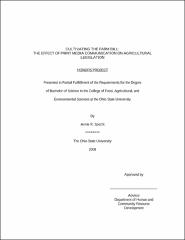 Agricultural legislation poses a particular problem for politicians. It directly affects less than two percent of the nation’s population, but it indirectly impacts the entire country through economic channels. No ag-related legislation faces more scrutiny than Farm Bill 2008, and its journey from inception to ratification has been well-documented by nationally recognized print media outlets, such as the Washington Post, the New York Times, and USA Today. The objective of this study is to determine the possible consequences of such widespread print media attention on the formation of agricultural legislation, using the 2002 and 2008 Farm Bills as models. The focus of the study has been narrowed to the most noteworthy and controversial aspect of the Farm Bills—farm subsidies. The study’s first goal is to analyze the print attention the legislation garnered. To achieve this, articles published in this two-year span from major print media outlets are pooled and subjected to a content analysis. They are coded according to their physical placement within the publication (i.e. the section and page on which they appeared); their length and breadth of focus, including the particular commodity subsidies discussed; and their tone, evaluated by identifying specific words and phrases. The study’s second goal is to conduct similar analyses on the two years leading up the 2008 Farm Bill. The economic climate was outlined, and the coding methods were repeated using articles from the same publications printed from late 2005 to the beginning of 2008. As the study is ongoing, the results from 2000-2002 and 2005-2008 will be compared when the coding process is complete. The study hypothesizes that 1) articles published between 2000 and 2002 will illustrate a more positive stance on farm subsidies due to the stronger socioeconomic state in that time period, which is reflected in the ultimately ratified legislation; and 2) articles published between late 2005 and early 2008 will show a decline in media endorsement of farm subsidies under weaker economic conditions that will most likely be carried over into the final draft of the 2008 Farm Bill. By increasing agricultural media professionals’ awareness of the impact of national print publications on agricultural policy, the industry can work to educate journalists about agriculture, which will allow them to more effectively present information from a well-informed and unbiased point of view.