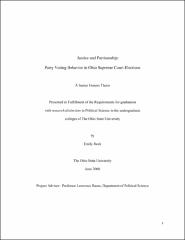 Judicial elections do not generally attract much attention. The rolloff rates are often high between those voting in more prominent elections and those voting for state judges. That is, a significant minority of voters makes the effort to show up to the polls but do not vote in all races. Since 1984, The Ohio State University Political Science department has conducted election surveys measuring variables about the respondents as well as about voting behavior in statewide races; for my thesis, I analyzed survey data from gubernatorial years between 1986 and 2006 to examine the relationship between informational levels and party voting in Ohio Supreme Court elections. The scope of my project is unique, since few surveys have included questions about judicial elections, especially over such a lengthy time span: this is the first opportunity, nationwide, to examine voting behavior in judicial elections over time based on surveys. While most states select judges through nonpartisan or partisan elections, Ohio judicial races are notable for their hybrid mix of nonpartisan and partisan elements. Candidates for the Ohio supreme court first run in a partisan primary, but in general elections, parties are not listed on the ballot. Ohio presents a unique subject for research, since it combines elements of both types. I sought to determine the relationship between party-line voting (voters choosing candidates from their own party) in Ohio Supreme Court races and information levels present in the races. As voters acquire more information about a race, will they be more or less likely to vote for the candidate from their own party? There are two parallel issues here—the amount of political knowledge that a voter brings to an election, and the amount of information that is actually available in a given race. I hypothesized that as information levels increase, and also as voters’ education and political knowledge increase, voters would be more likely to vote on a party-line basis. I also predicted that information levels would have a greater effect on high-knowledge and high-education respondents than their low-knowledge and low-education counterparts. In a partisan election, I would predict the opposite—as voters gain more information, they might find reasons to vote against party, rather than using party identification as a shortcut. But in Ohio judicial elections, a key component to information gathering is determining candidates’ party affiliation. Moreover, the overall amount of information available is limited, so there is little to dissuade voters from deciding based on party. Voter knowledge was measured by education levels and general political knowledge, demonstrated by respondents’ answers to survey questions. Party identification was measured by self-identified survey responses. Availability of information was determined by campaign spending and amount of media coverage for each race. The research I conducted allowed me to compare different election years and elections to each other, to see how varying levels of information will affect party voting. All three of my hypotheses were supported by the data. First, the three highest visibility races averaged higher rates of party voting than the other, lower visibility elections. Second, there were slight differences in party voting levels among groups of voters based on education and knowledge, with the higher- education and knowledge respondents showing higher rates of party voting. And finally, increases in information levels correlated more strongly with the college graduates and high-knowledge groups than the non-graduates and low-knowledge groups. Two main implications can be drawn from these results. While increases in spending in judicial races have been widely viewed as a negative phenomenon, this study shows that such high-visibility races might help voters obtain more useful information about a given race. Also, the study suggests that voters incorporate information when it is available; ignorance in regards to judicial races might be more a product of lack of available information than willful apathy on the part of voters.

This thesis was awarded grants from the OSU Arts and Sciences College as well as the College of Social and Behavioral Sciences.