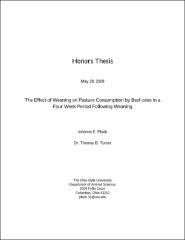 Forty crossbred Angus x Simmental cows were used to investigate the effect of weaning systems on pasture consumption by cows in the four-week period shortly after weaning. Cows and their calves were assigned to one of two treatments. Animals in the first treatment underwent a normal weaning protocol in which the calves remained with their dams and the dams were lactating throughout the duration of the study (NW). Animals on the second treatment underwent an early weaning protocol in which calves were weaned from their dams and the dams were not lactating throughout the study (EW). Distance walked was used as a proxy of forage consumption while grazing. Pedometers were attached to the cows two weeks after weaning and the total number of steps was recorded once a week for four weeks. Additionally the age of the dam, the daily mean temperature, daily total precipitation, and daily mean relative humidity were recorded. Data were analyzed as a repeated measures, mixed model using the MIXED procedure of SAS with the fixed effects of treatments, weeks, their interactions, and age of dams, and the random effect of dams nested within treatments, with a compound symmetry structure of the errors. Dams on the NW treatment walked on average 73,666 (± 1745) steps per week compared to 72,123 (± 2102) for the EW cows (P=0.53). There was a significant treatment by week interaction (P<0.001), as EW cows walked significantly less in week 2 (72,343 ± 2753) than NW cows (78,609 ± 2580). Age had a significant effect with first and second parity cows walking more (76,944 ± 2998) than third or greater parity animals (64,795 ± 1405). Although the effect of treatments was not significant across the four weeks, the significant effect during the second week suggests that a larger scale project with more experimental units and, hence, more statistical power should be performed. In addition, the validity of using pedometers as a proxy to feed consumption on pasture needs to be investigated. In addition, future research should be done over a longer period and the frequency of the measurements should be increased. The pedometers used resulted in approximately 37% of the potential measurements being lost, indicating that improvements in the devices are desired. In addition, future research should impose a better control (balance across treatment) for age of the dams. In summary, the pattern of feed consumption during the second week was affected by weaning. Thus suggesting that changes in grazing practices may be warranted, and also allowing producers to better manage their pastures and possibly maintain more cows per acre of land.