Altering Life History Traits: A Size-Selective Predator Decreases the Size of its Prey. 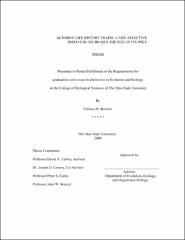 Predators negatively influence prey primarily through decreasing their total abundance. However, size-selective predators may also decrease fecundity through selective removal of large, more fecund individuals. To determine how size-selective predators affect life history traits of their prey, we examined size at first reproduction, maximum size, and neonate size of the zooplankter Bosmina as a function of saugeye (walleye, Sander vitreus, females x sauger, S. canadense, males) density in fish hatchery ponds. We hypothesized that prey size would decrease with increased predation according to the size-efficiency hypothesis. From linear regression analyses we found marginally significantly smaller size at first reproduction (SFR) and smaller maximum size (MAX) with increased predation. We found marginally smaller neonate size (NEO) with increased predation. Due to the marginal explanatory power of predation, additional factors (bottom-up, maternal, and time effects) were examined. Ponds were fertilized with either 20 or 30 ug L-1 of phosphorus allowing us to look at the bottom-up effect. From a one-way ANOVA, we found significantly larger SFR and a marginally significantly larger MAX in the 30 ug L-1 of phosphorus ponds. We used a multivariate analysis to examine simultaneously the effects of predation and fertilization. The results showed that sizes decreased at the same rate with increased predation independent of the fertilization rate. Additionally, from linear regression, we found that maternal effects played a significant role in determining Bosmina NEO and MAX. Finally, we found that SFR significantly decreased while MAX significantly increased temporally during the production season. These results indicated that this system has multiple factors that contribute to altering Bosmina life history traits and that the removal of large individuals may lead to decreased trophic efficiency by decreasing the energy reaching higher trophic levels, which will lead to less fish production in a hatchery.