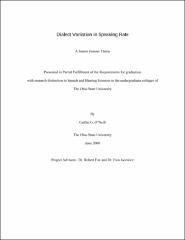 The difference in speaking rates among American English regional dialects have been assumed and become popular belief in U.S. culture without supporting evidence to prove or disprove it. This study compares the speaking rates of those in south-central Wisconsin and western North Carolina in order to see if southerners do, in fact, speak more slowly than northerners. Age and gender are also compared. Secondly, the effect of dialect, age, and gender were examined in the difference in speaking rates in read sentences and spontaneous speech, because previous research has shown that speaking rate is slower when reading aloud than when having a conversation. Articulation rates were calculated and results showed a significant difference in both rates of spontaneous speech and read sentences for the two dialects, with Wisconsin speakers being faster for both. Age was also a significant factor for both types of production in Wisconsin, and although gender did not have a main significant effect, there were significant differences in young men and young women in North Carolina for read sentences. These results supported some previous preliminary findings and should be considered in future dialect studies.