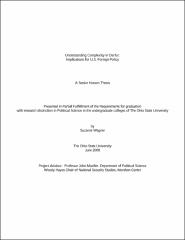 Most major regional conflict – Bosnia, Kosovo, Rwanda, and Somalia – have been portrayed and explained in very simple terms. Most notably, their causes have been understood to be ethnic, religious, economic or environmental. While these diagnoses are not incorrect, they are narrow in their portrayal. Much intellectual energy has been devoted to describing these conflicts based upon a combination of these four elements. And the tendency for the media, humanitarian organizations, and other interested parties, including those fighting, to portray the conflicts in these terms is not without warrant as these concepts generally hold some legitimacy as elements of the conflicts. Such simplistic explanations do seem to mobilize political will and media attention towards the victims, and much more quickly than complicated ones. The danger in this line of thinking, however, is that the simplicity with which we address conflict appears to sustain the conflict or make it even worse. Keeping things simple has its own implications and the question becomes, which is worse? Humanitarian organizations, the United States and the United Nations have approached the conflict in Darfur, and many others, in terms of good versus evil rather than accepting its very ambiguous nature. That ‘good‘ and ‘bad’ notion implies an exercise of moral judgment, but that morality consistently causes more harm than good, suggesting a fundamental flaw in our approach. Rather than pursue justice to right insults to our international moral sensibilities, we ought to pursue justice for the actual victims of these conflicts. This paper realigns our intentions to that pursuit and posits suggestions for approaching the conflict in Darfur.