Enhancing the Care of Pregnant Women with Epilepsy: A Focus Group Approach 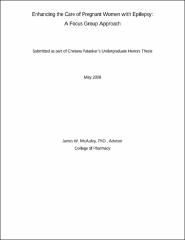 BACKGROUND: Through a long-standing collaboration with the Medical Center’s Maternal-Fetal Medicine program, a clinical pharmacist from the Comprehensive Epilepsy program works with pregnant women with epilepsy in the High-Risk Obstetrics Clinic. Through this clinical collaboration, it has been observed that some women stop or lower their antiepileptic drug therapy during pregnancy out of concern for their baby. This puts the woman and her baby at risk from increased seizure activity during the pregnancy. PURPOSE: The aim of this qualitative project was to learn why pregnant women may or may not alter their antiepileptic drug therapy. This aim was achieved by conducting small focus groups in pregnant women with epilepsy. METHODS: Pregnant women with epilepsy were recruited from the OSU Medical Center’s High-Risk Obstetrics Clinic and the Comprehensive Epilepsy program. The 60 to 90 minute sessions were held at the offices of the Epilepsy Foundation of Central Ohio in collaboration with their Social Worker. Our target sample size is 20 pregnant women with epilepsy. RESULTS: To date, we have conducted 3 focus groups with a total participation of 10 pregnant women with epilepsy. The average age of the participants was 25.6 years. Most women had a history of generalized tonic-clonic seizures. Six did not plan this pregnancy and this was the first pregnancy for two of the ten women. Some women reported they had self-altered their antiepileptic drugs due to side effects before pregnancy, but most women did not self-alter their medicines during this pregnancy. After holding the three focus groups, some common themes have emerged. Specific concerns that were raised by the women included the potential risk of problems in their newborns, the lack of education on whether they had to wean their baby off of antiepileptic drugs, concerns over the delivery and the concern for passing epilepsy on to their baby. These were accompanied by general concerns about epilepsy that included driving, having a plan for their children if mom had a seizure and the need for epilepsy education for family members & significant others. Some of the unintended effects of these interactive patient sessions have been the connectivity between participants. There was an expressed comfort meeting and getting to know other women with epilepsy and there was even some patient-to-patient teaching. CONCLUSION: Once we complete patient recruitment, we believe our study has the potential to shed more light on why some women with epilepsy may or may not alter their drug therapy during pregnancy. By identifying these reasons, we hope to be more proactive in our approach to patient education and ultimately improve outcomes in women with epilepsy.