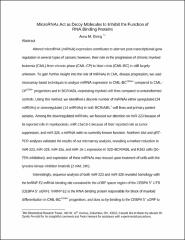 Altered microRNA (miRNA) expression contributes to aberrant post-transcriptional gene regulation in several types of cancers; however, their role in the progression of chronic myeloid leukemia (CML) from chronic phase (CML-CP) to blast crisis (CML-BC) is still largely unknown. To gain further insight into the role of miRNAs in CML disease progression, we used microarray-based techniques to analyze miRNA expression in CML-BCCD34+ compared to CML-CPCD34+ progenitors and in BCR/ABL-expressing myeloid cell lines compared to untransformed controls. Using this method, we identified a discrete number of miRNAs either upregulated (34 miRNAs) or downregulated (14 miRNAs) in both BCR/ABL+ cell lines and primary patient samples. Among the downregulated miRNAs, we focused our attention on miR-223 because of its reported role in myelopoiesis, miR-15a/16-1 because of their reported role as tumor suppressors, and miR-328, a miRNA with no currently known function. Northern blot and qRT-PCR analyses validated the results of our microarray analysis, revealing a marked reduction in miR-223, miR-328, miR-15a, and miR-16-1 expression in 32D-BCR/ABL and K562 cells (50-75% inhibition), and expression of these miRNAs was rescued upon treatment of cells with the tyrosine kinase inhibitor imatinib (2 mM; 24h). Interestingly, sequence analysis of both miR-223 and miR-328 revealed homology with the hnRNP E2-mRNA binding site contained in the uORF spacer region of the CEBPA 5’ UTR (CEBPA 5’ uORF). hnRNP E2 is the RNA binding protein responsible for block of myeloid differentiation in CML-BCCD34+ progenitors, and does so by binding to the CEBPA 5’ uORF to block its translation. Indeed, REMSA experiments revealed that synthetic miR-223 and, to a greater extent, miR-328, could bind efficiently to recombinant hnRNP E2 protein in vitro and compete for its binding to an oligoribonucleotide containing the CEBPA 5’ uORF. Similarly, REMSA and UV-crosslinking showed that both miR-223 and miR-328 could bind endogenous hnRNP E2 from lysates of BCR/ABL-expressing but not parental cells, as well as from lysates of parental 32Dcl3 cells ectopically expressing a Flag-tagged hnRNP E2 protein. These results suggested that miR-223 and miR-328 may act as decoy molecules to interfere with the translation-regulatory activity of hnRNP E2. Consistent with this hypothesis, ectopic expression of miR-223 and, to a greater extent, miR-328, was capable of restoring G-CSF-driven granulocytic maturation of differentiation-arrested 32D-BCR/ABL cells and CML-BCCD34+ cells. Furthermore, C/EBP-alphaprotein levels were markedly increased in both miR-223- and miR-328-expressing 32D-BCR/ABL cells as well as in primary CML-BCCD34+ patient samples. Finally, while ectopic expression of miR-223, miR-328, miR-15a, or miR-16-1 had no significant effect on the viability of normal or BCR/ABL-expressing cells, ectopic expression of miR-15a/16-1 or miR-328 significantly impaired BCR/ABL-dependent colony forming ability (miR-15a/16-1: 65-75% inhibition, P<0.001; miR-328: 40-50% inhibition, P<0.01). Altogether, these data reinforce the importance of BCR/ABL-dependent post-transcriptional gene regulation during CML disease progression. Furthermore, they suggest a novel function for miRNAs as regulators of RNA binding protein activity and provide a paradigm-shift for miRNA function as currently understood.