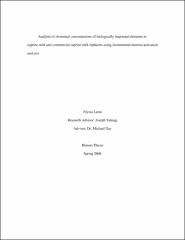 Goats play an important role in meat and milk production around the world. Goats are especially important to underdeveloped countries due to their ability to live in harsh climates where other livestock animals cannot survive. Baby goats that are fed commercial milk replacer seem to be less robust than goats fed natural goat milk. The objective of this study was to determine if differences in mineral concentrations that could be affecting the animal’s health exist between these milk sources. Goat milk was collected from 44 does at the start of lactation and towards the end of lactation. 10 does were collected a second year to determine environmental influences between years that might influence milk composition. My hypothesis is that commercial milk replacer will be either deficient or excessive in elements that have been previously demonstrated to impact health of neonates. Instrumental neutron activation analysis was used to identify Mg, Mn, Na, Cl, Al, Br, and K. This process coverts the natural elements into isotopes, which are then quantified by gamma ray spectrometry using standards with known elemental concentrations that were also irradiated. This approach can detect differences in ppm in mineral content. Results show that in a comparison of season only chlorine is significantly different. Individual goats do not vary in mineral content within the herd. Within the same season, bromine and magnesium are significantly different from early and late lactation. Among the different milk replacers studied in this research, potassium, sodium and aluminum are all significantly different. Several elements were found to be statistically significant when comparing the different types of water. The final comparison studied found that sodium and aluminum are statistically significant when comparing natural goat milk to replacers. Several of these differences suggest that care must be taken to insure that the young get the correct mixture according to their stage of lactation.